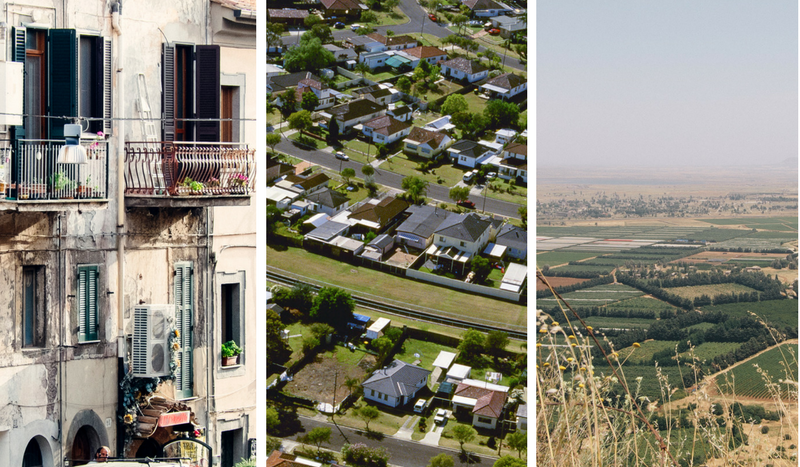 As you may guess by the title, there are three main ways one can describe the area they live in as it pertains to the geography, development, and population. You can live in a city; however, the city could be spread thin and not have a high population. One can live in an area that is extremely populated like New York City and would have to describe their city in a larger context as “city” does not do the population justice. These descriptions of population and physical landscapes are: rural, suburban, and urban. Depending on the areas that are being described, each one of these three words can explain the physical terrain and architecture for the surrounding area and the amount of people in that area.
Are you into farming? Rural areas are referred to as open and spread out country where there is a small population. Rural areas are typically found in areas where the population is self-sustaining off of natural resources of the land, or they work in coal, copper, and oil. Suburban areas are references to areas where there are residences. These areas have a larger population than a rural area; however, they are small and typically outlying from a larger city. Suburban areas are also known as “burbs” for short. And if they are their own city, they are limited on resources and have little political autonomy and representation. Finally, urban areas refers to areas of high population that is both for living and working purposes. These communities do have political autonomy and are typically a hub in their area where all resources are available for the outlying rural and suburban areas.
Typically, those that inhabit rural areas of the country must travel to the nearest large town or city for medical care, schools, and even shopping. Forest areas, wetlands, and mountainous areas are not necessarily considered rural. They aren’t rural because they are usually in proximity to necessities like the ones mentioned in the first sentence. In comparison, most often, suburban areas refer to single-family homes or housing divisions that are relatively close to one another rather than apartment or condominium homes. Depending on the size of the urban area, there can be extreme overcrowding, and the city might not be spread out geographically but is only considered urban because of the population. In the United States, urban areas are defined by a population of more than 1,000 people per block of area. Rural areas are the least populated areas. Suburban areas have a larger population than rural areas; however, urban areas have a larger population than both.
I just came from a different part of America than I am used to and it dawned on me that most younger people love the city life, but as they get older they want that suburban life, then they dream about living that rural life. I guess it becomes more about being in a relaxed environment over the hustle and bustle of a city. I was in Prescott Arizona and it was certainly a change of pace from my life in Southern California. The landscapes of the places and the people are so different. My theory about the age relating to the location doesn’t apply to everyone, but there are definitely a lot of places in this country where the age median changes. These areas are relative to the population amounts as well. Retiring in Florida is an ongoing joke in movies, but it must hold some merit. The weather probably plays a factor as well. I say that people should decide not only what kind of house they want to live in, but realize how important the area is as well